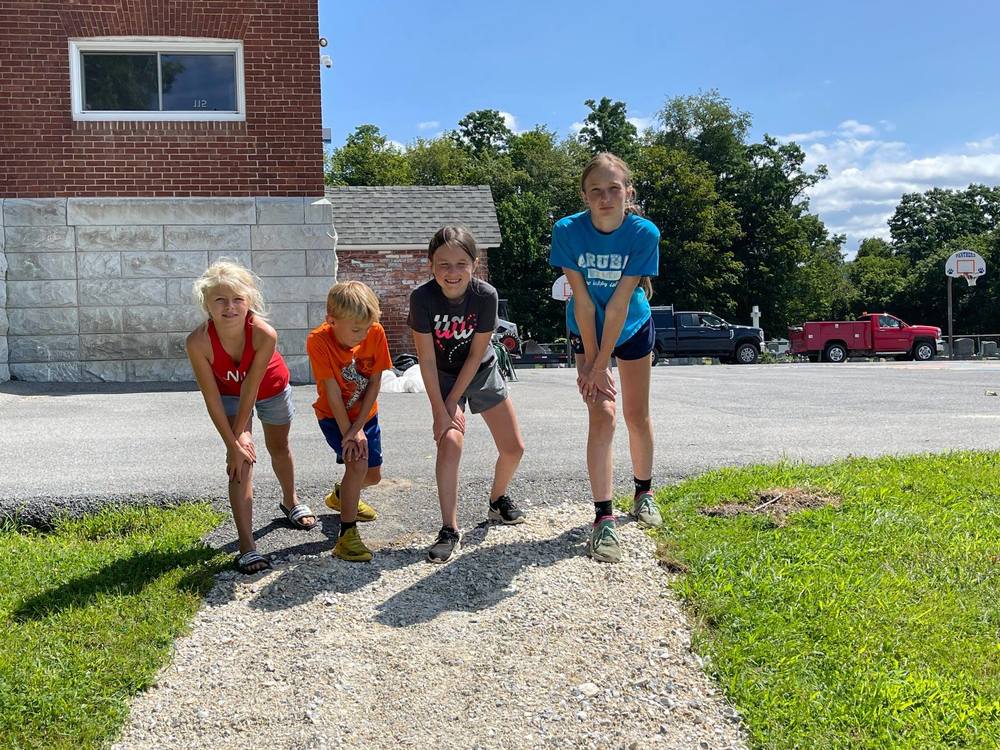 Stretching approximately a quarter-mile, the crushed stone path — which winds through the school grounds, skirts the playing fields and connects to Pleasant Street — was installed by community volunteers over several recent weekends just in time for the start of the new school year.

Principal Debbie Alexander said that, while Lothrop has always had an outdoor education focus, the pandemic pushed educators everywhere to think more deeply about what else could be done outside.

On the grounds of Lothrop, Alexander began to envision a walking path and permanent outdoor classroom area.

She brought her ideas to the Lothrop Parent Teacher Organization, which helped to rally the community around the project.

Alexander said the school chose to tackle the path first because it was logistically easier and could be completed relatively quickly. She noted the outdoor classroom is in the works.

With the PTO on board, she said the project came together quickly. Planning began in the spring and construction is mostly finished. She said it would have been done sooner, but the rainy summer slowed things down some.

The project was truly a community effort, said Alexander. Aside from a small amount of PTO money spent on materials, all other equipment, labor and materials were donated by local businesses and families.

“Pittsford is a really great community for getting everyone involved and getting donations from different places,” said PTO member Brett Mullin. “Once we put the word out there and got everybody motivated, it kind of came together pretty quickly.”

Mullin, who has a son entering first grade and daughter entering second grade, said he and his wife volunteered to help to mark the layout of the path and rake stone during recent work days.

He said he thinks the path will play a useful role for kids this year.

“I think it was important to a lot of people because we just came off a year where everyone was, kind of, stuck inside trying to figure out what to do during the pandemic. It's just a way to get everyone out and active again.”

Alexander agrees, noting that a variety of activities and events are already planned for it.

She said she will lead the entire school community on a walk along the path on the first day of school.

She also expects teachers will utilize it to get students outside for classroom break — especially, now that most students will still be required to wear face masks indoors.

Alexander added that Lothrop's new physical education teacher is excited to incorporate the path into her lesson plans, as are members of the student running club and the local chapter of Girls on the Run, which practices on school grounds.

The path also will be the location of a fun run during Pittsford Days on Sept. 4.

But the path isn't just for students. Alexander noted that community members will be able to use the path outside of school hours.

She said she already spied a local couple walking it on Monday morning.

Volunteer Reg Charbonneau, owner of Charbonneau & Sons Masonry and Property Maintenance, is excited the path will be an asset for the entire community.

Charbonneau, who has a daughter entering fourth grade at Lothrop and helped with the path's construction, said he was happy to leverage his local construction contacts to make Alexander's idea a reality.

“We were able to just use all of our local, small town businessmen and their assets, from dump trucks to material,” he said. “With the volunteers (and) a couple of days on a weekend, we had the machinery and the manpower to get it done for everybody.”

For Charbonneau, the effort is a testament to local community spirit.

“When people were asked in our small community … nobody refused one bit to help out with the little parts or the big parts. Everybody was willing to jump on board. It was great.”